All the Birds, Singing: A Novel 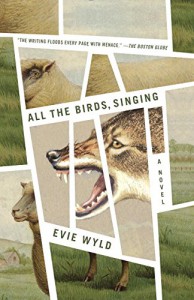 Evie Wyld’s All the Birds, Singing tells the story of Jake Whyte, an Australian woman with a troubled past who finds herself tending a sheep farm on a secluded British island. As the narrative’s multiple plot lines unravel, we are told more of Jake’s history and her struggle to forget it. These multiple threads threw me for a loop at first, but until it quickly becomes clear that one is current day and moving forward while the other gives us Jake’s backstory in reverse chronological order. I’ve read some grumbling in the reviews for this approach, but I thought it was great. It was like peeling back layers one by one. It might make you think a little bit to keep track of where you are on both plot lines, but that’s not such a terrible thing.

All the Birds, Singing is oppressive, dark, and gooood. Not to mention it’s funny, too. In all I’ve read about this novel, no one seems to mention the humor. It’s not hilarious - you won’t be gasping for air - but there were moments when I chuckled to myself because the characters were saying or doing goofy things, or were just so realistically awkward with each other that it cut through the gloom. Lloyd’s character, the middle aged drunk who becomes Jake’s unlikely companion, was fantastic. He added some much needed levity to an otherwise heavy novel, and even in doing so we learned his own story was a sad one. And Dog. Anyone who owns and/or loves dogs will appreciate Dog. (I’m know I’m guilty of talking to my dog the way Jake does.)

I have to say that I’m surprised people are all up in arms about the ending. I thought it was one of the better endings I’ve read in a long while. I like the ambiguity. I like that it got kind of wild and psychological in the final chapters. It shifts the whole narrative and makes you rethink everything that’s come before. Sure, Wyld leaves it open ended, but do you really think those characters are going to find any closure? I don’t think that’s what it’s about; their stories aren’t going to be wrapped up all nice and neat. This was a story about the futility of running from something inescapable, denying something irrefutable, and seeking redemption in isolation. Closure’s not on the menu, but maybe the first step towards it is.
Tweet